In 2013, more than 1.5 million new cases of cancer were diagnosed, and nearly 585,000 Americans died from the disease during the same year.

National cancer care expenditures are poised to reach $156 billion within three years. While the number of cancer patients living beyond their initial diagnosis rose to almost 14.5 million in recent years, that number is expected to grow to almost 19 million by 2024, and mortality rates decreased by 13 percent between 2004 and 2013.

For patients who’ve been diagnosed with cancer, enrolling in a clinical trial can be an important part of their treatment. We studied over 100 cancer treatments, supplements, and clinical trials to better understand which are among the most popular, where data on them are found, and how often these treatments provide positive results. Read on to see what we discovered.

Using our interactive guide, you can search various different cancer treatments by name or type to see the overall search volume they net, how well-discussed they are on Google Scholar, and even how promising their results have been so far.

Our guide also shows you which kind of trials these treatments have been a part of – from animal and lab trials to those that have started or completed clinical trials on actual patients. To further our understanding of cancer treatments and clinical trials, any research we may have missed can be submitted below.

The Impact of Clinical Trials 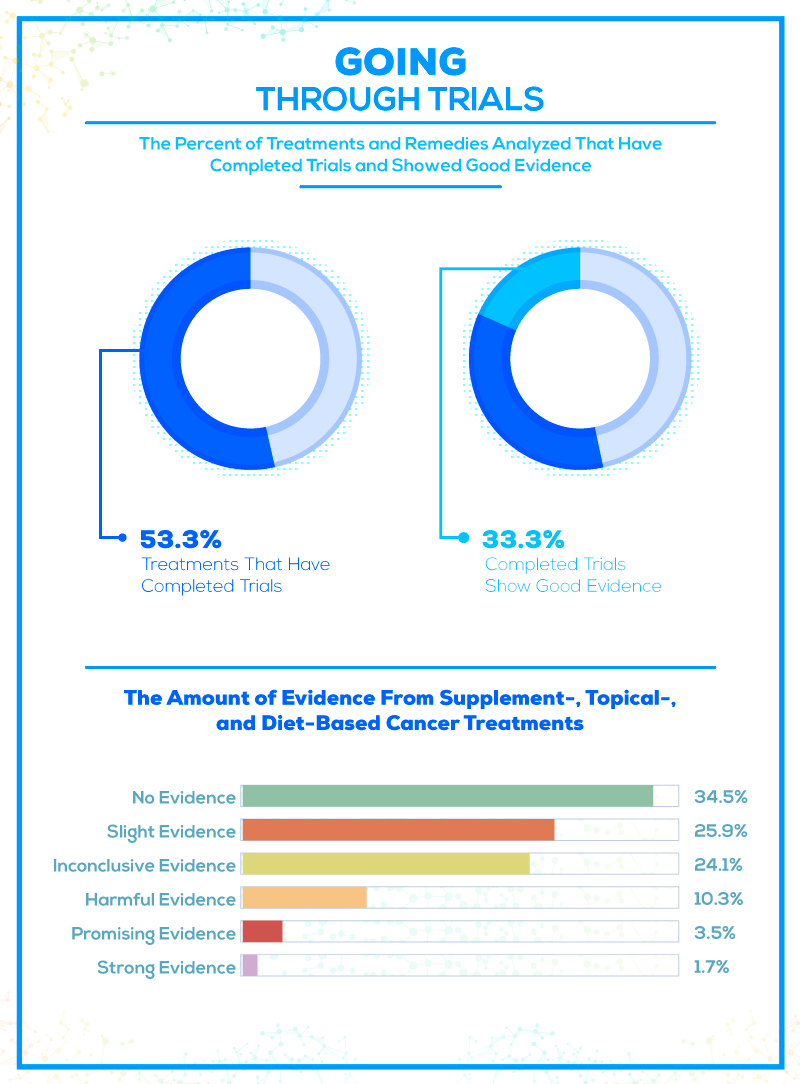 As of this writing, there are over 88,000 registered studies across the U.S. and more than 240,000 across the world for various ailments and diseases. While the number of registered clinical trials has grown by nearly 20 times since 2005, today, only 3 to 6 percent of eligible cancer patients in the U.S. participate in clinical trials specific to cancer.

While clinical trials may provide hope to millions of people across the U.S. who’ve been diagnosed with various forms and stages of cancer, there’s a gamble associated with betting on a clinical trial as the primary method of treatment for these diseases.

Of the 105 treatments and supplements we examined, just over half (53 percent) completed trials, and only a third of those showed positive evidence. In some cases clinical trials close early to protect the health of patients who were receiving what is known simply as an inferior treatment.

For the 56 treatments we studied that had completed clinical trials, a third of those (19) showed good evidence in their efforts to help cure or treat patients who’d been diagnosed with cancer. Natural supplements can sometimes be among the most ineffective – and even harmful – ways to attempt combating cancer. Nearly a quarter of topical, dietary, and supplement treatments were found to be inconclusive, while more than a third showed no effects at all. More than 1 out of 10 supplement-based treatments were actually harmful to the patient ingesting them. 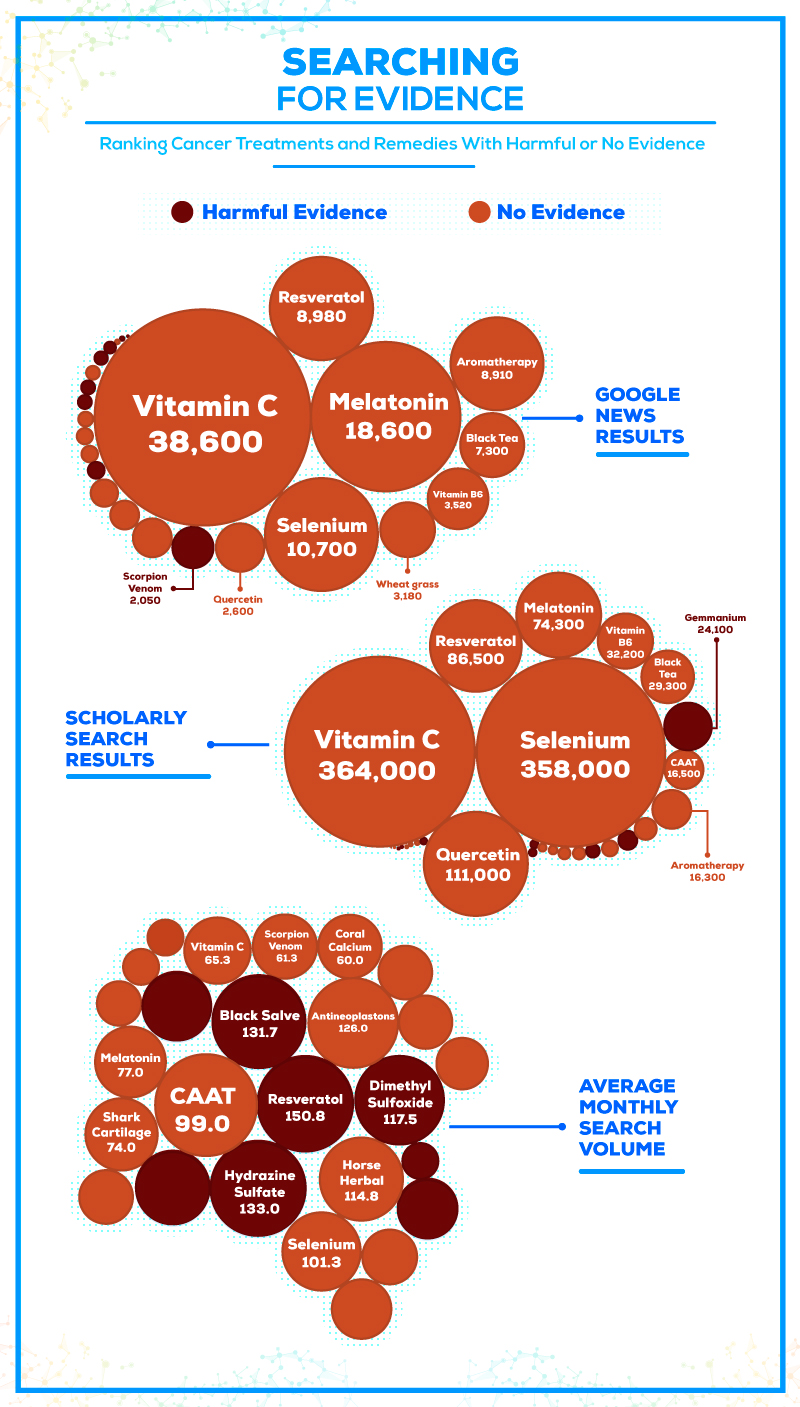 Those performing their own at-home cancer research via Google may sometimes find different results than the treatments commonly searched for on Google Scholar’s websites.

Via Google Scholar, Vitamin C is one of the most commonly listed results for supplements in relation to cancer treatment. According to at least one trial, high doses of Vitamin C, in conjunction with other medications, can help boost the effectiveness of standard cancer treatments. Still, the use of Vitamin C on its own hasn’t been shown to treat cancerous cells.

Melatonin was also commonly referenced on both Google News and Google Scholar. Like Vitamin C, some research has shown that melatonin, when combined with traditional treatment options, can improve the outcome of survival. Like Vitamin C, melatonin has shown no effects on its own as a cancer treatment.

The second most frequently mentioned treatment, according to scholarly search results, was selenium, a mineral generally found in our diets. Like these other supplements, selenium has yet to show signs of positive effects in treating cancer on its own, though it has multiple medical applications, including as a preventative treatment for cancer.

Overall, many of the most referenced substances have been linked to harmful effects in cancer patients. Ipilimumab, black salve, antineoplastons, and hydrazine sulfate were among the most commonly searched treatments that have shown negative effects in the cancer patients who utilized them. 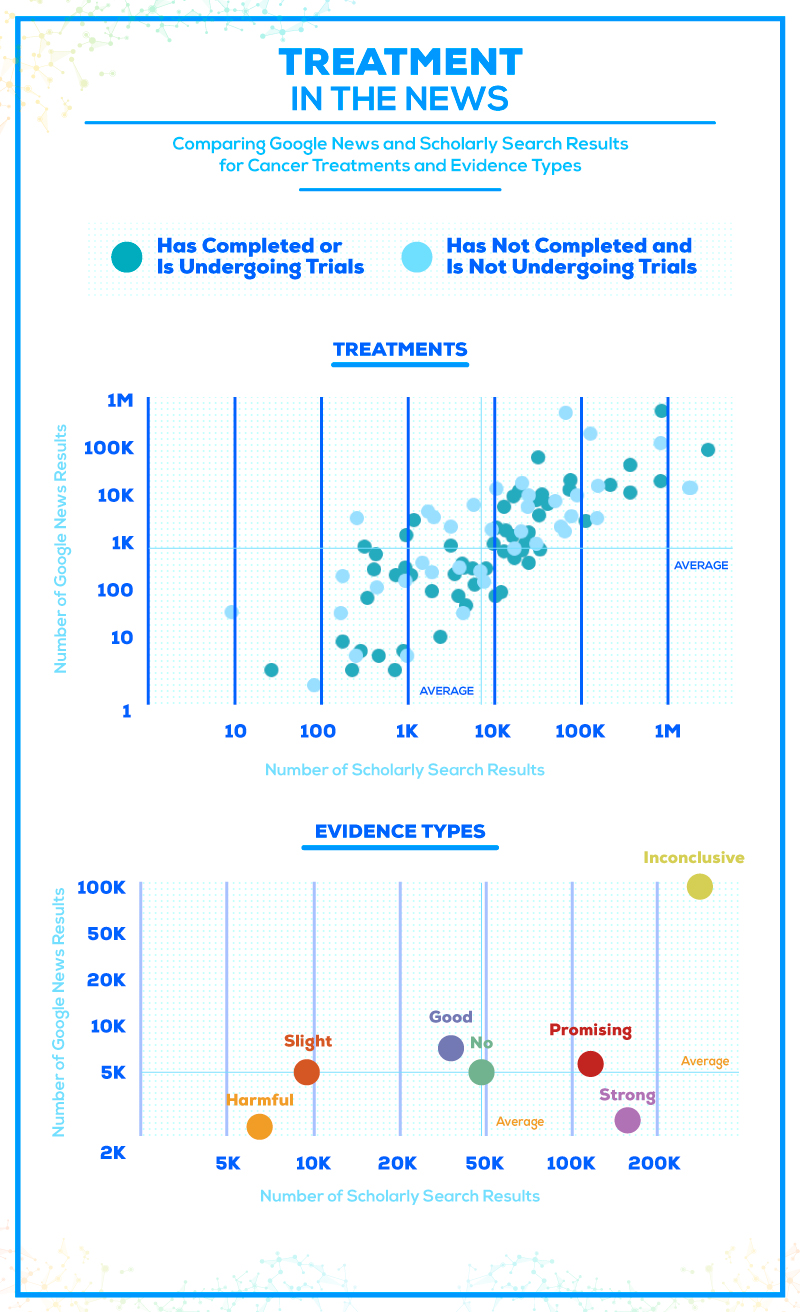 Of the supplements and treatments we examined that were referenced on both Google News and Google Scholar, many were still listed as showing inconclusive results in their effects at combating various forms of cancer. Supplements like Vitamin D, calcium, tea, and Vitamin C were among the most popularly mentioned inconclusive treatment options. While Vitamin D hasn’t been shown to treat cancer on it’s own, many studies that have found that it shows genuinely positive health benefits, and occasionally positive results, in reducing the risk of certain types of cancer (like colorectal cancer), but evidence is less strong to support a reduction in risk for other forms (like breast cancer).

Many of the treatments that showed strong signs of positive impact were more commonly referenced via Google Scholar rather than Google News. For example, external beam radiation therapy, open surgery, and tamoxifen therapy all showed strong results but were significantly more common on scholarly web pages than Google News sites. External beam radiotherapy (commonly referred to as ERBT) is a well-established treatment option for prostate cancer, while tamoxifen therapy is a treatment for breast cancer patients that has shown positive results.

We compiled treatments for cancer from the most recent information provided by National Cancer Institute and Memorial Sloan Kettering Cancer Center, as well as treatments listed on Quackwatch.com. By analyzing and verifying each treatment’s purported uses, evidence, side effects, and success, we were able to create a scale of conclusive to harmful cancer treatments. It is possible there is information on clinical trials that we may have missed.

Search volume comes from SEMrush and looks at the average monthly search volume. In the case of general terms, such as marijuana and tea, we added cancer to the search query to ensure the results were related to people interested in both tea and cancer treatment. We did not include cancer for other terms, such as nivolumab, where it’s primarily used in the treatment of cancer. To get a better look at search volume, we looked at the average of the search term we used in addition to all related search terms as reported by SEMrush.

News and scholarly interest were determined by using the term in relation to cancer and searching on Google News and Google Scholar respectively and recording the number of results for that particular query.

To help further the research associated to cancer treatments and clinical trials, we would love to see our study featured on your website for any non-commercial purposes. Please just ensure a link back to this page so that your readers can see these findings in their entirety.